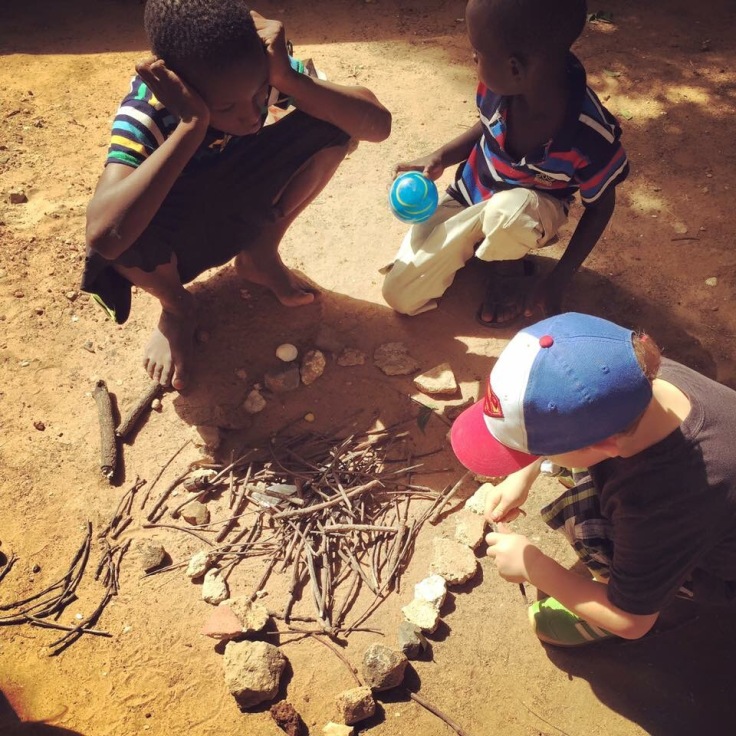 I’ve been dreading this day, knowing in my heart it would come. It’s not something you can prepare yourself for. One day you look up and see your son standing in the street leaning against a car window, begging for food and money to give to the serigne he studies under. He’s not actually your son, but the same size clothes hang on his four-year-old-frame and the same little grin explodes on his face and that twitchy little boy energy just radiates from him. But this is not your son. This four-year-old  talibé is another woman’s son. And your heart hurts for them both, unable to imagine the loss and grief they go through every day that they are apart.

My son played with some of these talibé boys in our courtyard this morning. One of them, Arona, stayed and played for a long time, which was surprising because most of the boys left after a while to get back to begging on the street to meet their daily quota. It turns out that someone had given Arona 2000cfa ($4) earlier today so he already had what he needed take back to his master at sunset.

I know, I know we’re not supposed to give the talibé boys money because it perpetuates a cycle of slavery and abuse. But I am thankful for the person who gave Arona money this morning, in a way buying him a day a freedom to just be a kid and play with my son on the swings, eat Cheez-Its under a tree and scrape up their knees and elbows playing soccer.

More on talibés in Senegal:

So how can we help talibés?
Moutarou’s Story: My Experience as a Talibé in Senegal
Interacting with talibés, an interview with Trevon Rainford